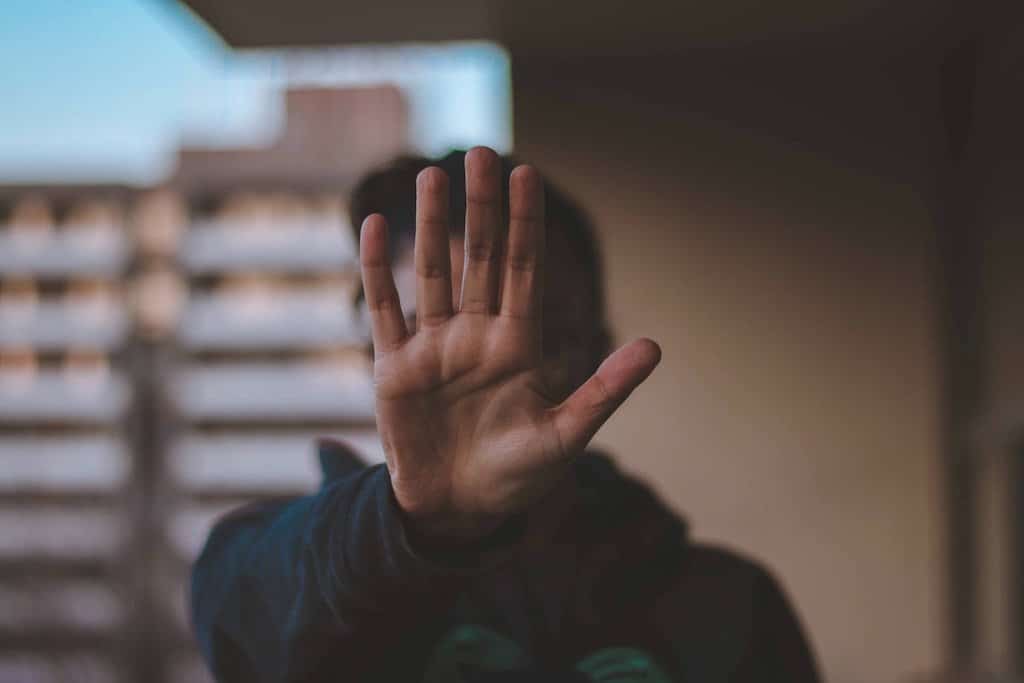 consent for kids: teaching children autonomy and raising a culture of consent

No…just no. By doing these things we risk greater harm not less. We cannot teach children autonomy by hiding. If we reject all things feminine we are giving objectivity more power. We need to embrace the feminine and explore non binary options. We must raise the bar of what is equal and expect others to meet that same bar. We should empower our kids within their femininity, non binary and masculinity spectrums. Consent education is one way parents can give children autonomy and agency. If we define consent for them, tell them they are the boss of their body, how create boundaries, teach them to love their bodies, know they are valuable we can lessen the effects of objectification society is so hell bent on instilling in them. Our focus is dismantling the system of objectification, not the gender spectrums themselves. It is the notion of inferiority that we want to vanquish!  Yes I said vanquish! And when our kids are teens we will empower them to embrace their sexuality, but right now let’s put down our pop tart and start with the definition of consent so we know where to start with our littles.

The first thing to do to teach our children autonomy and raise this culture of consent is to define consent for our kids. Bell goes on to explain the definition of consent varies by state. Definitions may or may not include affirmative consent, freely given consent, capacity to consent. These opaque standards make it challenging to create a clear standard way to identify consent and learn consent skills.

In addition to lack of consent definitions, each state has its own regulations regarding sex education there are only 9 states that mandate consent education. A review study conducted in 2019 reported that a majority of the US health standards failed to mention “consent” directly. If it was mentioned it was only mentioned under sexual consent not consent unrelated to sexual contact.  As we discussed in the intro in part 1, there are a host of opportunities for parents to discuss consent before children are pre pubescent and ready for sex education.

A set of terms beneficial for gender creative parents is found in a UN women’s article “When It Comes to Consent There Are No Blurred Lines”. 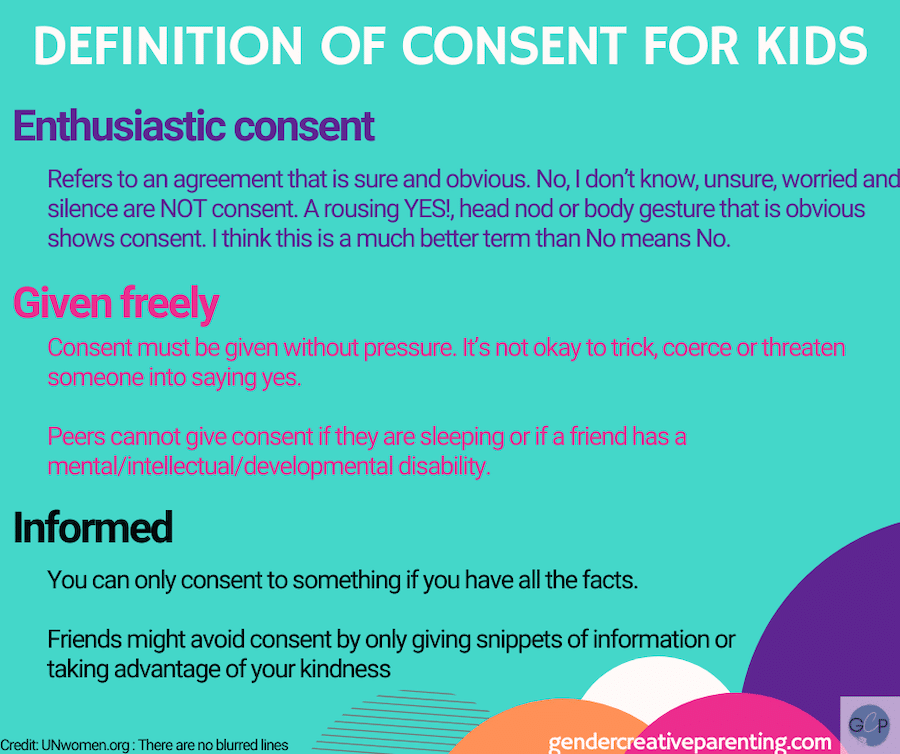 My favorite out of this list is the enthusiastic YES! No means No doesn’t seem to be cutting it these days and I think teaching consent this way will allow a better understanding of what peers are ok with. I also recommend Consent Awareness Net’s video “Your consent for kids”, which discusses these labels and gives examples.

In addition, Harvard’s article “Consent at every age”   with Gideon Kahn, discusses developing a shared vocabulary, around the concept of consent, — simple words like body, space, and touch. “The goal is that if a kid doesn’t want to be hugged by another kid, he/she/they can say, ‘This is my body,’ and be understood.” Phrases like “your the boss of your body” tends to resonate with kids. See an excellent catchy foot stomping video here.

Another important definition for consent includes our non verbal littles. Recognizing non verbal communication also bolsters the notion of enthusiastic consent and the notion silence doesn’t mean yes. Below are seven ways for children to recognize another child may not be consenting. 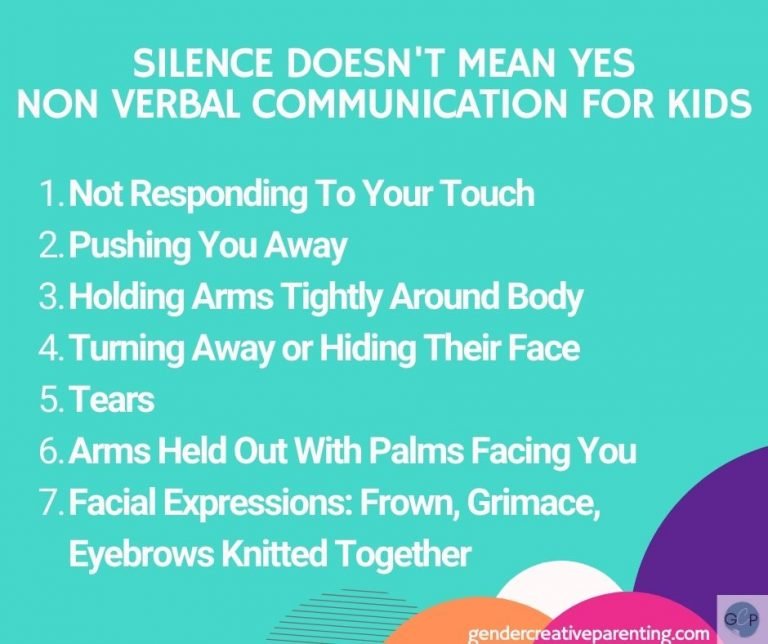 Creating A Culture Of Consent

Now that we’ve addressed the definition of consent. Let’s go over how to use this definition to create skills our child can use in every day life.

Bell discusses adherence to any cultural practice is associated with reinforcement with a cultural community. If only one person is adhering to practice changes this will not create a new environment. It is important to involve a majority of group members. Gender Creative Parents can take the four practices below and reinforce it in a number of settings, in the home, at school, within faith communities, relatives houses etc.  By doing this we can bolster other parents to create a culture of consent outside of our home.

Bell’s “Changing a boundary” reminded me to check in more often with my kids, to make sure the behavior is still wanted and well received. It also gives parents an opportunity to role model how changing a boundary is well within their child’s control. I think this is one of the most important lessons for teaching children autonomy. Later in life this will come more naturally if a child agrees to something then realizes they do not like it. They will be able to recognize they want to change the boundary and have already practiced. It will also help them recognize if there is a problem with someone not allowing them to change the boundary, so they may leave the situation. 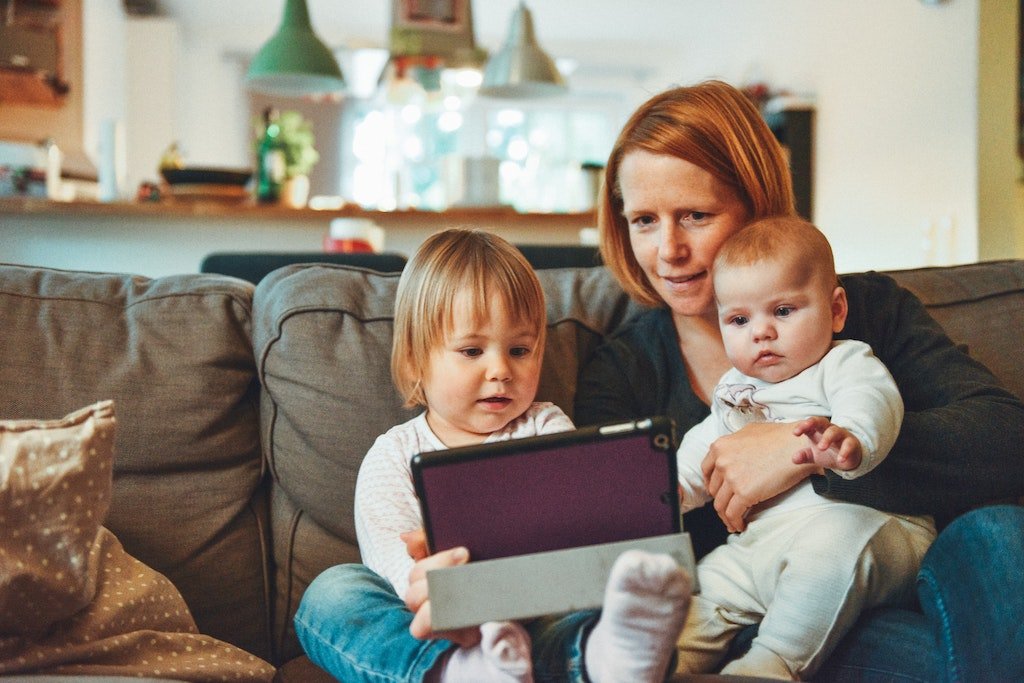 Kahn goes on to suggest a few of the following,  to lay ground work for new social norms and teach children how to communicate with others in an understanding of themselves and others outside of objectification.

Social Emotional Skills. A lot of early education, Kahn says, is centered around giving kids the social-emotional skills to thrive, and these naturally dovetail with the concept of consent and respect. “Emotional intelligence, perspective-taking, empathy — these all allow you to basically understand your own feelings and the feelings of others, and are foundational to respect.”

Teach kids that it’s OK to express hurt. Junlei Li, a professor at the Harvard Graduate School of Education, discusses the importance of Listening to children and checking in with them about their emotions. “Too often, adults try to discourage students from showing sadness, anger, or discomfort, Li says, but learning to identify those emotions can help them advocate for themselves when they’re hurt, as well as develop empathy and recognize similar emotions in other children and adults when their actions are making others uncomfortable”.

Lead by Example.  Of course, some of consent is skill-based: learning to simply ask questions about what behavior or actions are appropriate. “Would you rather a hug or a high-five?” Give children agency over what is age-appropriate and do not take it personally if they do not want physical affection from you. Refusing a good night hug is OK. Advocate for them when around others. “No, grandma little doesn’t want a kiss or hug today, maybe tomorrow”. Is this uncomfortable. Yes. For some families. Is it more important to give agency to your child to break down objectification barriers that will affect them for the rest of their life than worry about our family’s comfort? Yes.

Sibling Respect. If a sibling does not want touching they should not be made to do it, no matter their age. Sibling lessons are also helpful when teaching about appropriate touching with other children. My kids are still little and I know my toddler often to tries to grab their siblings private parts during bath time. By now the older kids have learned to swing away, put down the toddlers hand and remind them that “this is my penis/vagina, we don’t touch other kids private parts”.

A Parent’s Body. Create expectations around your own body as well and teach them the importance of respecting those boundaries. “I had such a great time with you today! But now my body needs some space.” Give alternative activities you can do that don’t involve as much touching. This not only role models consent for the children it also initiates self care for the parent…you’ll still feel guilty but try to remember if you start early and at home your children have more of a chance to their own agency and to respect themselves later on in life even as they are bombarded with objectification.

Body Parts. Mother Mag’s article “Rape Culture: What it is and how to combat it when raising kids” emphasizes the importance of naming a kids’ body parts. It is essential for them to understand the biological names for these parts, vagina/penis/nipple/butt. The biological names give them a sense a “realness” not just objectification with cutesy or crude names they will learn along the way. Starting at birth we stated the various body parts as we washed or changed them, and soon our children learned that vocabulary as well.

Role Play. Role playing is an excellent way to portray ideas to little kids. You can role play as a family or get stuffed animals involved.  It gives kids concrete examples and words through a variety of scenarios. It also prevents freezing. Freezing can occur when a child does not know what to do, this lack of response can lead other children to think their action is appropriate even if the freezing is occurring to prevent that action. If a child freezes it’s a good time to reinforce the notion of enthusiastic yes.

Body positivity is another tool GCP parents can adopt to mediate negative body image. Parents should start their body positivity education early and teach it to all genders. An excellent resource for body positivity is Mighty Girls  website. There are excellent tools to empower girls and feminine presenting kids. Like our other article Books For Raising Boys GCP encourages, these tools be given to all boys and non binary masculine presenting kids as they will also internalize patriarchal norms of objectification towards their feminine counter parts.

Keep open and communication with boys and check in how they feel about their body. See if they have any questions. Remind them they are in charge of their body, give realistic examples of men and masculine presenting adults, this will decrease their risk of participating in objectification of themselves and others as teens when they start to take on unhealthy behaviors.

Common sense media has another article discussing media parents can turn to for positive gender role models. You can check it out here.

Parents have a lot to take on as we venture out into the world with our littles. These resources and tools will help us navigate the difficult and sometimes uncomfortable decisions. We’ve looked at consent from many different angles lets summarize what we’ve discussed.

Now, let’s pick up our pop tart sword and start the vanquishing!

Summary of Resources and Articles

Femininity and Domination: Studies in the Phenomenology of Oppression (Thinking Gender)

The case of Sarah Baartman

A Mind of One’s Own- Haslanger

When It Comes to Consent There Are No Blurred Lines”

“Consent at every age”

“Rape Culture: What it is and how to combat it when raising kids”

Common Sense Media: Gender Stereotypes Are Messing with Your Kid

As an Amazon Associate, some of the links are affiliate links. This means that, at zero cost to you, I will earn an affiliate commission if you click through the link and finalize a purchase.

6 thoughts on “consent for kids: teaching children autonomy and raising a culture of consent”